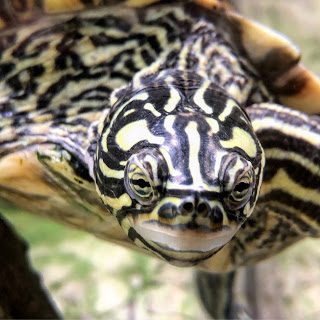 Mississippi is an ecological hotspot with one of the largest percentages of biological diversity in the US. The state is comprised of unique ecoregions that include barrier islands and coastal lowlands, river floodplain forests, hilly coastal plains and evergreen and deciduous forests all of which support a vast amount of wildlife. One of Mississippi’s ecoregions, the Southeastern Conifer Forests (aka longleaf pine forests), is categorized as one of the 200 most outstanding areas for biodiversity in the world. It is also  listed as critically endangered. Only about 5% of the original habitat remains with 95% having been destroyed through timber harvest or converted to agriculture. There are patches of this habitat left scattered across the southern portion of the state ranging in size from 50 acres to 1000 acres many of which are on private land.  Not surprisingly, this fragile area is the location for several of Mississippi’s threatened or endangered species. Threatened and endangered wildlife that rely on these habitats include the Mississippi dusky gopher frog, red-cockaded woodpecker, Louisiana black bear and gopher tortoise in dry longleaf forests. Yellow rail, Mississippi sandhill crane, Henslow’s sparrow, Le Conte’s sparrow and various bat species in wet pine savannas. The tiny endangered Mississippi dusky gopher frog has been a recurring visitor to the Supreme Court and remains at the center of a controversial debate over property rights.

Why should we care about saving a seemingly insignificant animal such as the gopher frog? Of course, we love and care about all animals at Mississippi Aquarium, but we understand how some may ask why it matters if a frog goes extinct? What about bald eagles or Giant pandas? How do we decide what animal species deserves to live and why? The Endangered Species Act, passed in 1973, was created to help answer these questions. The Act recognized that endangered and threatened species of wildlife and plants “are of esthetic, ecological, educational, historical, recreational, and scientific value to the Nation and its people”. It was also noted the importance of conserving the ecosystems upon which the endangered species depend.

Finding a balance between human and wildlife needs will always be a challenge, but it’s up to humans to make it happen. All wildlife can do is try to adapt to the changes that they are presented with. Quite simply, the primary driving force behind the current rate of extinction is manmade habitat loss. Over-exploitation of wildlife, destruction of wild lands, introduction of invasive species and pollution top the lists for causative reasons why a species becomes threatened, endangered or extinct.

So why care about the Mississippi dusky gopher frog? An wart covered frog known for covering its eyes with its  front legs when threatened and secreting a bad tasting substance to deter predators, the frog needs gopher tortoise burrows and seasonal ponds for survival. Currently only 100 of these frogs remain in the wild, all in Mississippi, located in three small areas of the fragmented longleaf pine habitat. The presence of these endangered frogs means that the lands on which they reside must be protected. However, to effectively reintroduce frogs to their historic range would mean that landowners who have the necessary habitat (but no frogs) would need to allow the frogs to be released on their lands. In doing so, they open up their lands to being overseen by the government and place limits on land use.

For now, the Mississippi dusky gopher frog hangs on in part thanks to accredited zoos and aquariums who have bred the frogs, maintain a captive population and carefully maintain genetic diversity with the hopes of one day being able to reintroduce them to the wild. Mississippi Aquarium will be proudly supporting these and all the efforts to save Mississippi’s unique wildlife, habitats and biodiversity.