Dolphins: So much more than meets the eye! 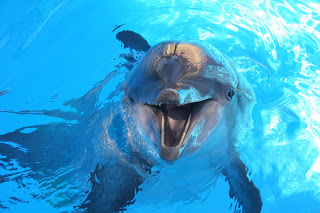 March is dolphin awareness month so what better way to be “dolphin aware” than to learn about the lesser-known aspects of dolphin biology. I am the Director of Research for Mississippi Aquarium, and for my PhD I studied the reproductive biology of bottlenose dolphins. I’ve been working with dolphins for over 20 years, and there is still a lot to learn about this fascinating species! I’m excited to continue my research with the dolphins who will call Mississippi Aquarium home as well as contributing to the conservation of the dolphins who live in the Mississippi Sound.

It is commonly believed that dolphins live in pods made up of family members who live together for their entire lives. In reality, dolphins live in fission-fusion societies. This means that they may form associations with other dolphins that lasts for minutes or years. Dolphins don’t form family units where genetically related individuals such as mothers and offspring live together long-term. Instead, dolphins seem to hang out with others that are similar to themselves. Mothers with babies are most often are seen with other mothers and babies, and the same can be said for juveniles, adult males and adult females without offspring. Two adult male dolphins can form a bond that lasts for years, and it is believed that this is an advantage when competing for a mate.

For most mammals breathing is an involuntary process. Humans will take approximately 25,000 breaths in 24 hours without even realizing it. Breath holding in humans takes a voluntary effort that can only be accomplished for a short amount of time. Dolphins are the opposite! They are involuntary breath holders and voluntary breathers. Simply put, dolphins have to think to breathe! Dolphins will take approximately 10,000 breaths in 24 hours and are much better at oxygenating cells than humans. However, if a dolphin were to fully fall asleep like a human, they could drown. Instead, dolphins sleep by allowing one side of their brain to rest at a time while the other side maintains breathing and locomotion. Research has shown that dolphins have a very thin connection between the left and right sides of their brain, unlike humans which have a strong, interwoven corpus callosum connecting the two hemispheres. This may be the reason why dolphins are able to shut down half of their brain and still be able to function.
‍

When we exercise our respiration rate goes up but dolphins do the majority of their exercise while holding their breath. This is possible because they store large amounts of oxygen in the lungs, blood and muscles that essentially act as a build in “scuba-tank”. Total oxygen stores are 2-3 times what is found in humans and dogs.

Water, water everywhere but nothing to drink

A dolphin is physiologically a desert species since they live in salt water without access to fresh drinking water. Fresh water is a necessity for mammals, so dolphins get their freshwater from the food that they eat. They maintain water balance with specialized water concentrating kidneys.‍